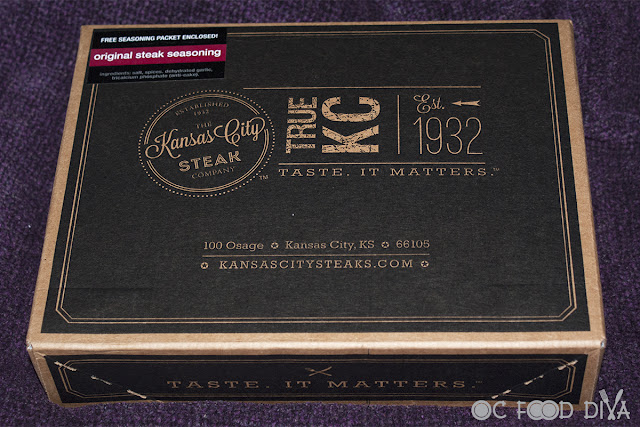 The Kansas City Steak Company has been around since 1932 selling steaks of superb quality. They personally hand-trim USDA 28-day aged beef for a steakhouse flavor that you can prepare in your kitchen and backyard grill. Kansas City Steak Company uses a wet aging process. This allows the meat to naturally age in a sealed Cryovac® package in a climate controlled environment for up to 28 days. The meat marinates in its own juices for a bold, beefy flavor and results in a tender texture. If you have ever heard of the term, “cuts like butter”, you can apply that term to these steaks. 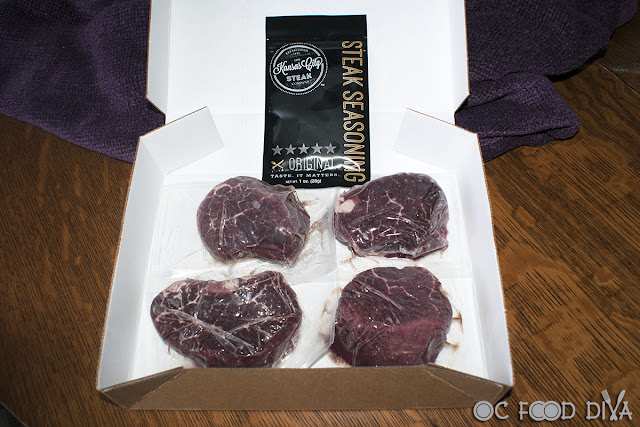 Kansas City Steak’s Super-Trimmed Filet Mignon (#1047 - $74.95) contains four 6 oz. filet mignons. These filets are center cuts from premium corn-fed Kansas beef tenderloin. Each steak is individually vacuum sealed and frozen. The box also contains “The Kansas City Steak Book” preparation guide and Steak Seasoning packet. For shipping, the steaks are packed in dry ice inside a Styrofoam box. Even with 2-day shipping, the steaks are still frozen upon receipt. You can grill them to perfection or try the author’s recipe below for a show-stopping presentation with a play on a Beef Wellington. 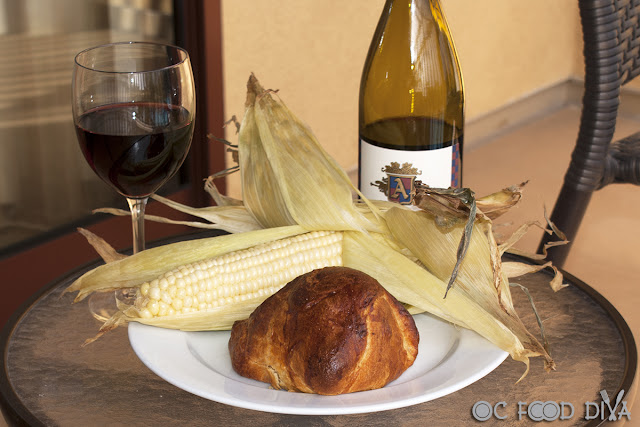 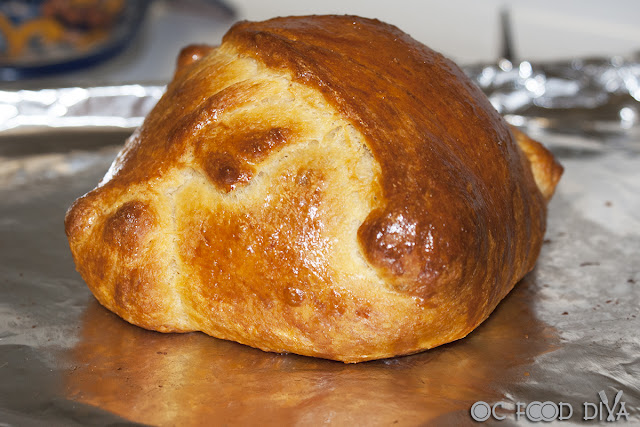 With summer in full swing, #SteakYourClaim with some Kansas City Steaks! 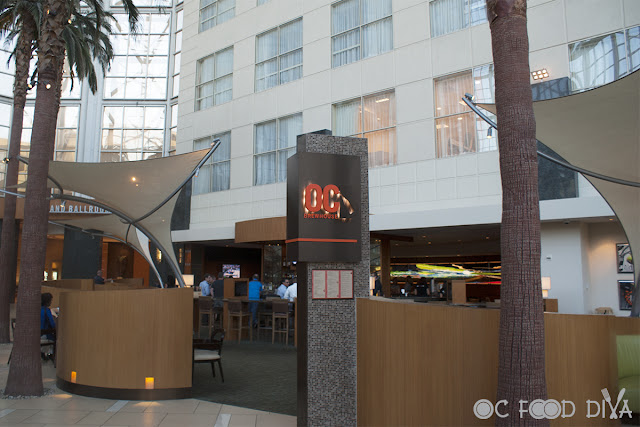 OC Brewhouse is located inside the Hyatt Regency Orange County a few blocks south of Disneyland at the base of its 17-story atrium lobby. It is a place to meet friends and colleagues after work or after convention sessions end for a sip of some of Southern California’s finest craft beers and creative pub grub. Their bar features the Blizzard Beer Systems so all draft beers are served at a chilly 29°F. For those of you who are non-beer drinkers, they also have a selection of creative signature drinks including house made margaritas and sangria. 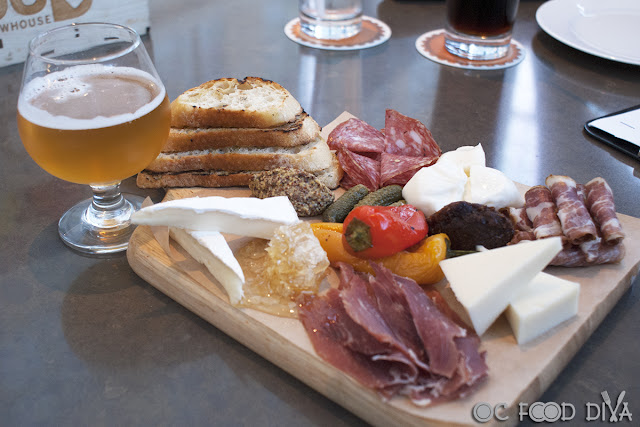 OC Brew House Blonde by Golden Road Brewery ($6.75) is a clean and crisp blonde ale brewed especially for OC Bew House (4.8% ABV, 25 IBU). Tasting notes: Easy drinking; light, clean, and crisp; subtle hoppy flavor. It doesn’t lose any of its flavor when paired with the Charcuterie platter nor does it interfere with the hearty flavors of the meats and cheeses. Rating: 4.5/5 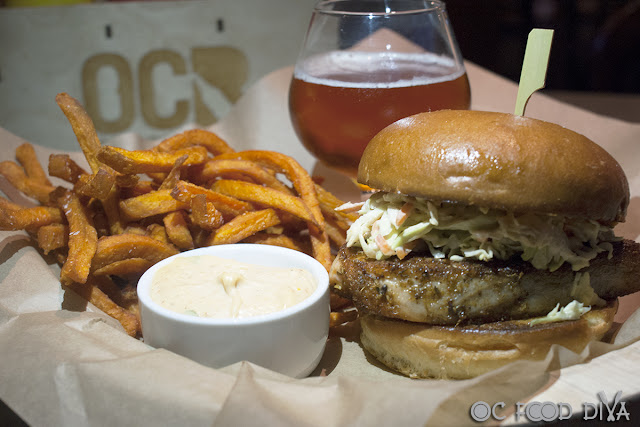 Blackened Skuna Bay Salmon Sandwich ($18) is topped with chipotle aioli and cole slaw atop a brioche bun and served with sweet potato fries. The salmon is succulent and tender. The blackened Cajun flavor works well with the salmon for a spicy kick without being overpowering. The brioche bun is buttery with a soft interior but is still sturdy enough to stand up to all the juices cascading from the sandwich elements. Try pairing with the Karl Straus Amber. Rating: 4.5/5

Karl Strauss Amber ($7) is made with Munich Malts and Cascade Hops with Karl Strauss’ proprietary yeast to create an exceptionally smooth Session Amber Ale (4.5 ABV, 18 IBU). Tasting notes: Heavier than most reds; Pairs well with the Blackened Skuna Bay Salmon Sandwich. It plays off of the Cajun flavor of the salmon and the sweet potato fries balances out the slight bitterness of the beer. Rating: 4.5/5 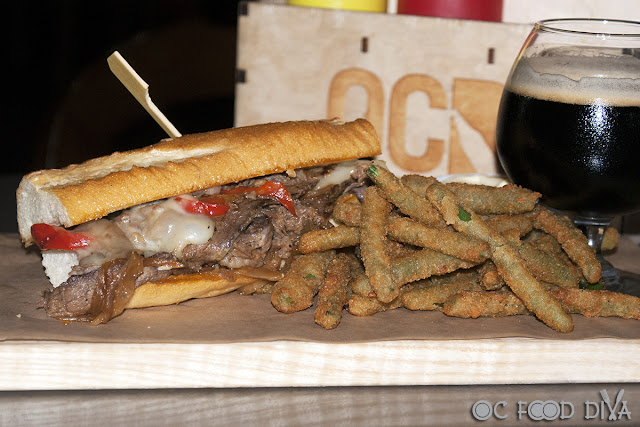 Stout Braised Brisket Sandwich ($16) is made with Belching Beaver Stout braised brisket, peppers, onions, horseradish cream, and provolone served atop a French baguette with green bean fries. If the West Coast had an official version of a cheesesteak sandwich, this would be it. The brisket is tender and has all the rich beefy flavor of braised short rib. The stout adds a rich, toasted coffee flavor to the mix. Ask for lots of napkins as this sandwich is a hot mess of deliciousness. It could probably use more bell peppers and onions to enhance the flavor contrasts. The baguette holds up well to the juicy meat and sauce. The green bean fries are amazing – crispy on the outside and sweet on the inside. Definitely pair this with the Belching Beaver Brewery’s Beaver’s Milk. Rating: 4.7/5

Belching Beaver Brewery Beaver’s Milk ($7) is a frothy and silky milk stout with strong notes of coffee (5.3% ABV, 30 IBU). Tasting notes: Herbaceous; big bites on the front and back of the palate; roasted coffee notes on the back end; pairs well with the Stout Braised Brisket Sandwich as it smooths out the flavor in the beer. Rating: 4/5 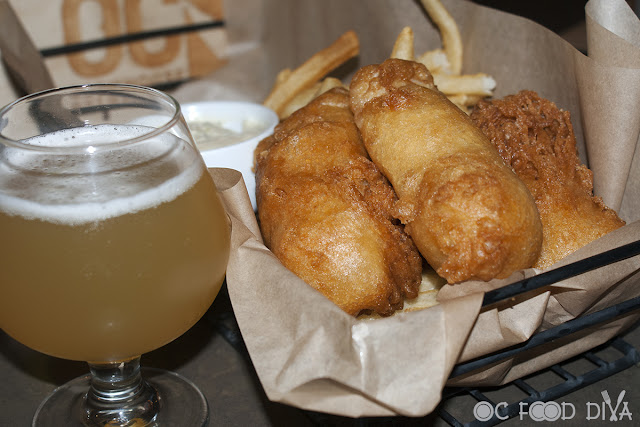 Fish & Chips ($14.50) is Hangar 24 Orange Wheat beer batter cod served with house made tartar sauce. The batter is almost hush puppy-like. It could be a tad lighter for a crispier texture. The beer infusion adds a slight sweetness to the succulent fish inside. The fries are crispy on the outside and tender on the inside. This pairs well with Hangar 24 Orange Wheat. Rating: 3.8/5

Hangar 24 Orange Wheat ($7) is crisp and tangy, and refreshing and uses local oranges in this wheat ale to give each drinker a fresh-off-the-grove experience (4.6% ABV, 17 IBU). Tasting notes: Fruity, citrus notes pair well with the fish. Citrus flavor permeates through the palate. This would also pair nicely with a summer salad littered with berries or other fruit. Rating: 3.8/5 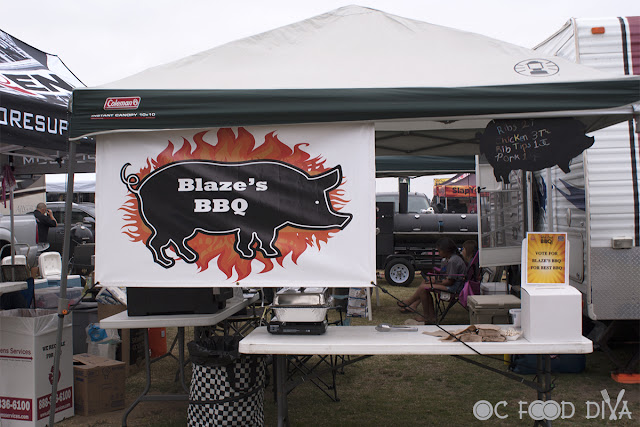 At 7 a.m. on Saturday morning, a cool marine layer blanketed the Queen Mary in Long Beach as 44 BBQ teams, who had been working through the night, started to prepare their delicious entries for the 5th Annual Queen Mary West Coast BBQ Classic. 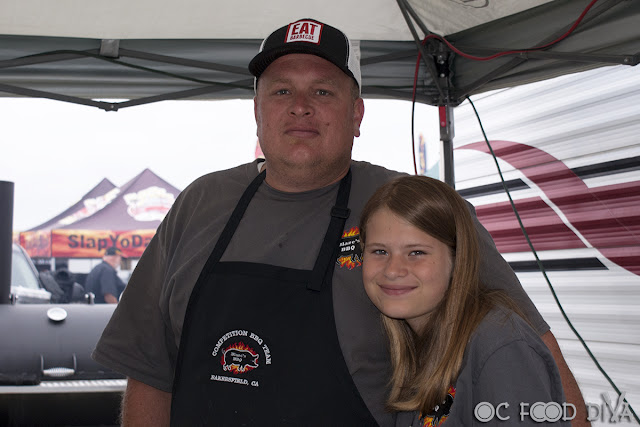 Blaze’s BBQ is a father/daughter team that started in 2015. Blaze Criqui and his daughter, Hailey, started like most teams – they love BBQ. Blaze has always loved to cook and BBQ for family and friends. His BBQ was so good that they told him he should enter some competitions. Hailey started showing her interest in learning how cook, BBQ, and loved a certain TV show, BBQ Pitmasters. So Blaze felt this would be a great opportunity to spend more time with Hailey and watch her grow into a full-fledged pitmaster. 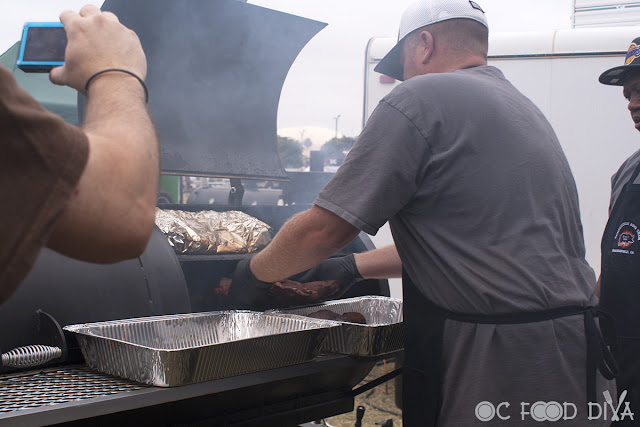 Smoker: Blaze’s BBQ uses a custom-designed, custom-built smoker that Blaze and his friend (Marty’s Welding in Lancaster) created back in 2014. Blaze and Hailey have yet to name her. 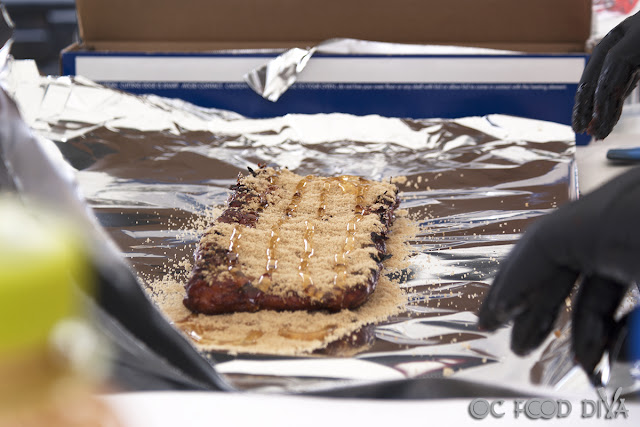 Competition circuit: Last year, they have placed in the top ten in all categories in numerous competitions. They came in 11th place overall and 6th place in Pork Ribs at Santa Anita this year. 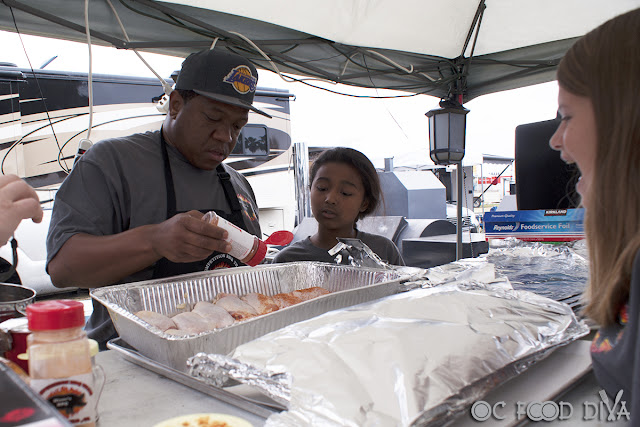 Challenges: Blaze’s BBQ faces the challenge of understanding what the judges are looking for. When the comment cards are few and far between, it is difficult to make necessary adjustments. For example, “Was it too salty?” “Was it not seasoned enough?” “Was there too much sauce?” “Was the meat not tender?” “What was wrong with the appearance?” Once pitmasters have the answers as to why they scored as they did, they can adjust for the next competition accordingly. 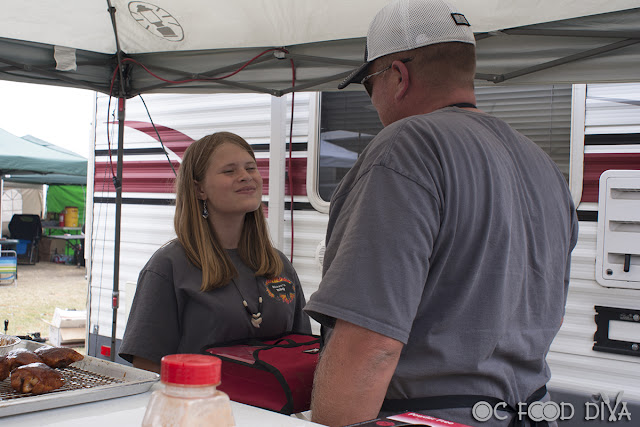 Blaze’s BBQ is all about having a good time with family, friends, and enjoying great BBQ. Blaze said, “If it wasn’t for some of my friends and family, Blaze’s BBQ would not exist. I have to give special thanks to my very awesome and understanding wife, Sherri Criqui, my awesome daughter and assistant, Hailey, my awesome son, Parker, my partner in crime, Ronnie (who is always taking off work to help out with Blaze’s BBQ), and Ronnie’s wife, Alexis, for putting up with him being gone all of the time.”

Now, let’s see how Blaze’s BBQ did in each category: 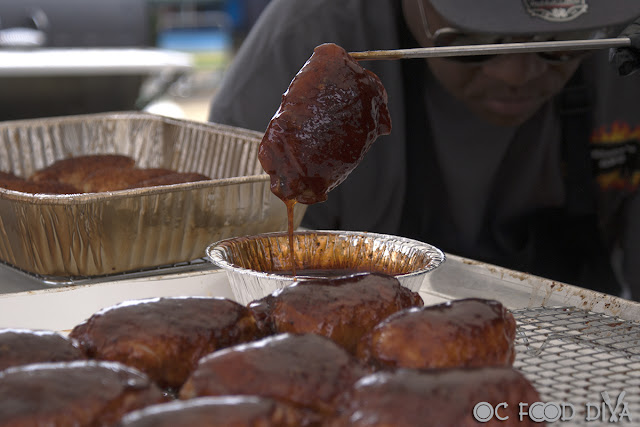 Chicken: Chicken thighs were turned in. The presentation was beautiful and a little different than most boxes. The chicken was tender, juicy, and had bite-through skin. The good seasoning on the outside penetrated through the meat right to the bone with a good spice level and was just sweet enough. The sauce was a little too heavily laid. A lighter glaze and maybe some time on the pit to caramelize it a bit would be better. OC Food Diva Score: 4.5/5 (If judging, Tenderness – 8, Taste – 8, Appearance – 8) KCBS Rank and Score: #37 with a score of 163.3828 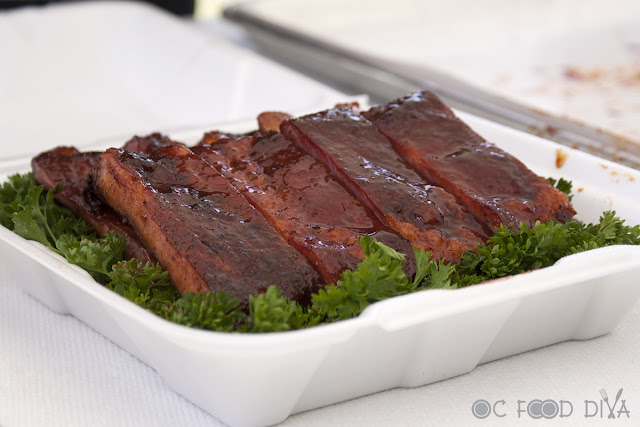 Pork Ribs: The ribs were perfectly sauced and had a nice looking presentation. It had a great balance of sweet and savory with just the right amount of smoky flavor. The pork was meaty and juicy. This was a near perfect rib. OC Food Diva Score: 4.8/5 (If judging: Tenderness – 8, Taste – 9, Appearance – 9); KCBS: #14 with a score of 169.1200 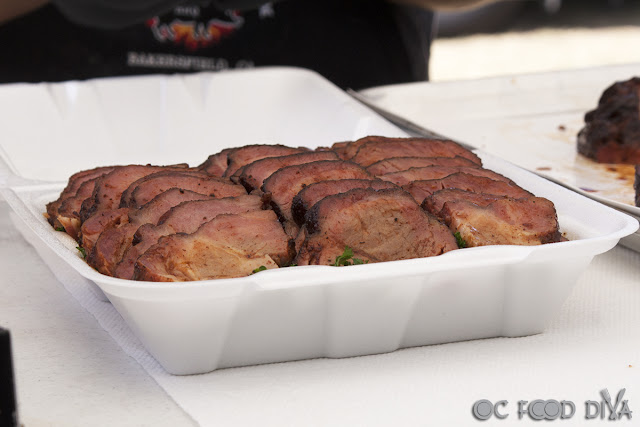 Pork: Sliced pork was turned in. It had a good smoked flavor along with a good spice level and just the right amount of sauce. It also had a nice bark and great color. The texture, however, was a little tight. It probably needed a little more time on the smoker. OC Food Diva Score: 4/5 (If judging: Tenderness – 7, Taste – 8, Appearance – 8); KCBS: #28 with a score of 164.5484 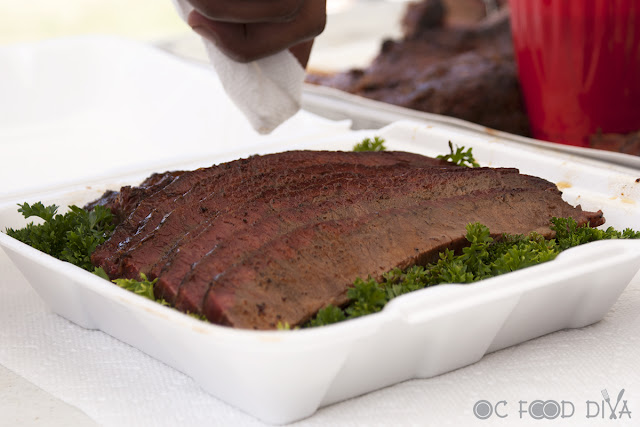 Brisket: Sliced brisket and burnt ends were turned in. Both cuts had a good smoke and beefy flavor along with good spice level. The sliced brisket was a little on the salty side. It needed a lighter coat of au jus before turn-in or none at all. Its bite was a little tight and had a fibrous texture similar to corned beef brisket. The burnt ends were much better with a tender texture. OC Food Diva Score: 4/5 (If judging: Tenderness – 7, Taste – 7, Appearance – 8) KCBS Rank and Score: #40 with a score of 156.5144 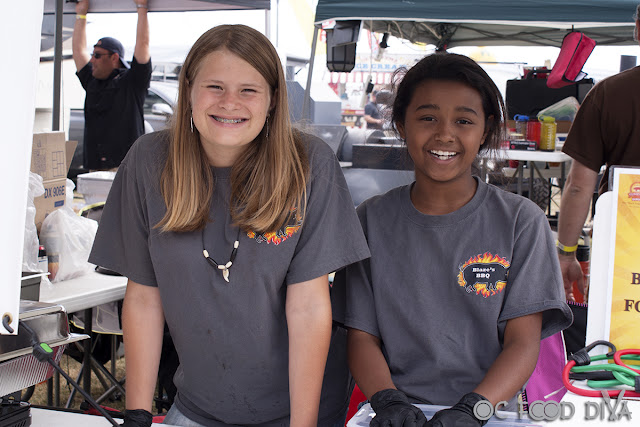 There was also a People’s Choice category, where the public could vote for their favorite BBQ team. Keep in mind, the items that they served are probably not what they turned in for the competition. They were either cooked separately or parts that may not have been up to par for turn-in. But it’s still some of the best BBQ you’ll ever have.

Blue Eyed BBQ served up pulled pork. It was very dry and needed more flavor along with sauce. Rating: 2/5

Smokin’ Harts served up brisket. It had a tender texture. Balanced flavors from beefy to smoky. Rating: 4.5/5

Smoky Doky Barbecue served up burnt ends. It had a very dry and chewy texture. It was also bland. It needs more seasoning and maybe some sauce. Rating: 2/5

Rude Not To BBQ served up brisket. It was overcooked and had a mushy texture. But it had a really good flavor. Rating: 3/5

Mad Dawgz served up brisket. It was tender but overcooked. It had a really good beefy flavor. Rating: 2.5/5

Burnin and Lootin BBQ served up sliced brisket and burnt ends. It had a tender texture. The flavors were well-balanced with a slight sweetness. Rating: 4.5/5 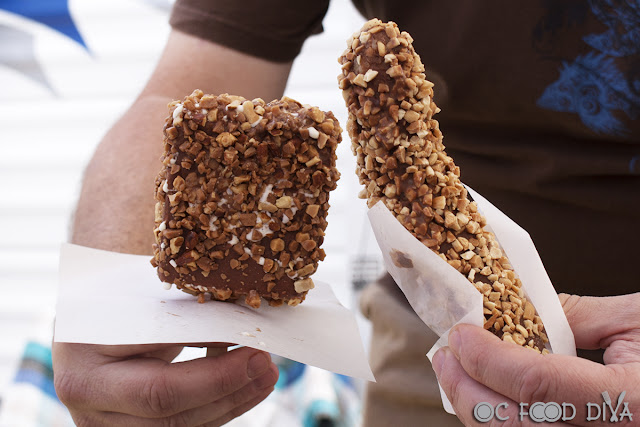 A great way to end a day of savory meats is with ice cold, hand dipped ice cream bars and frozen bananas. Check The Queen Mary’s events calendar and save the date for next year’s West Coast BBQ Classic! It’s an event not to be missed!
For more information:
The Queen Mary West Coast BBQ Classic
1126 Queens Hwy
Long Beach, CA 90802
+1.877.342.0738
at June 24, 2016 No comments: