The menu items in this post were provided by Cracker Barrel but the opinions expressed here are my own.

After spending a couple of days in New Orleans, we headed back to our hotel in Pensacola to spend our last evening where we called home for the last week. It was time to start packing up all the kitchen equipment, cooking utensils, and leftover ingredients for the road trip back to Orange County, CA. It was also the last night for my mom as well since she would be boarding the first flight out the next morning. One place on her foodie bucket list was Cracker Barrel and that’s where we were having dinner. The location in Pensacola was a short drive on the I-10 and conveniently located right off the freeway. 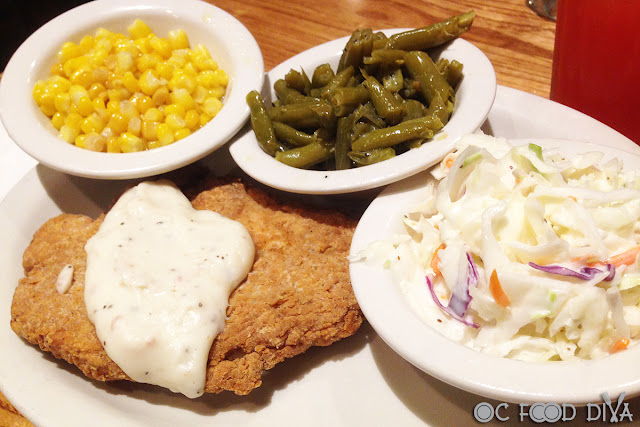 Chicken Fried Chicken is a generous portion of deep-fried chicken breast fillet topped with Sawmill Gravy and served with your choice of three Country Vegetables n’ Sides plus complimentary hand-rolled Buttermilk Biscuits or Corn Muffins. The hubby went with whole kernel corn, country green beans, and cole slaw. The chicken fried chicken had a crispy, blistered outside and juicy chicken breast inside. The Sawmill Gravy was a creamy and thick, stick-to-your-ribs type of gravy. The corn was sweet. The green beans were a little over cooked but had a nice flavor. The cole slaw was crisp and had a nice creamy, slightly sweet dressing. Rating: 4.8/5 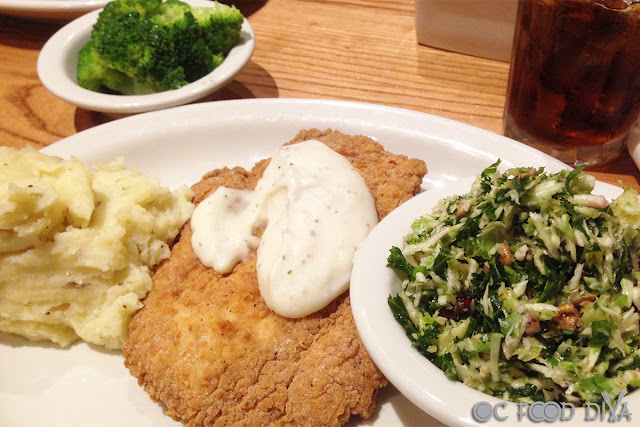 Country Fried Steak is a generous portion of USDA Choice steak breaded, deep fried, topped with Sawmill Gravy and served with your choice of three Country Vegetables n’ Sides plus complimentary hand-rolled Buttermilk Biscuits or Corn Muffins. I went with mashed potatoes, fresh steamed broccoli, and brussels sprouts n’ kale salad. The country fried steak was perfect with a crispy, blistered outside and juicy steak inside. The mashed potatoes were a perfect side. The broccoli was steamed just right, still a little crisp on the stalk and tender florets. The brussels sprouts n’ kale salad was refreshing with the crisp, raw brussels sprouts and kale along with the sweet dressing, sort of like a slaw. Rating: 5/5 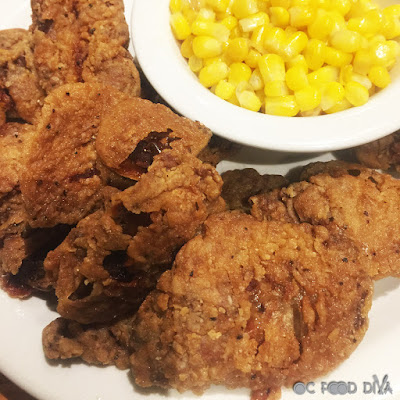 Fried Chicken Livers is served with your choice of two Country Vegetables n’ Sides plus complimentary hand-rolled Buttermilk Biscuits or Corn Muffins. Mom went with whole kernel corn and cole slaw. The chicken livers were crispy on the outside and perfectly cooked on the inside. The crispy outside contrasted with the soft texture inside and the faintly irony flavor pairs well with the batter on the outside. If you love liver like my mom and I do, you must try this dish! Rating: 5/5

If you love country cooking, you’ll love Cracker Barrel. Now, my mom can say she’s been to a Cracker Barrel and she can’t wait to go back!

The menu items in this post were provided by Luna’s Eat & Drink but the opinions expressed here are my own.

After the adrenaline pumping World Recipe Championship Top 10 Round at The Wharf, it was time to get off our feet and refuel ourselves with some delicious pub grub. Luna’s Eat & Drink is a neighborhood sports pub (fitting since we just competed in food sport). Executive Chef Bart Wilson has created a hand-crafted menu that delivers southern classics and low country food to a broader audience. Luna’s ambiance has a welcoming feel that is great for kicking back and watching a game or just enjoying a relaxing meal with family and friends. 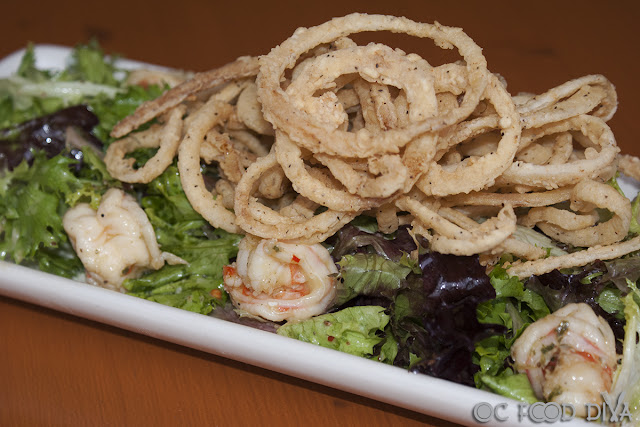 Marinated Gulf Shrimp Salad is shrimp served low country style with lemon and spices over crisp greens and topped with fried onions. The gulf shrimp had a meaty texture like lobster and had such a great flavor. The shrimp we normally get on the west coast pales in comparison. The lemon and spices added a nice zing and paired well with the salad greens. The fried onions were like “croutons” and added a crispy texture to the dish. Rating: 4.5/5 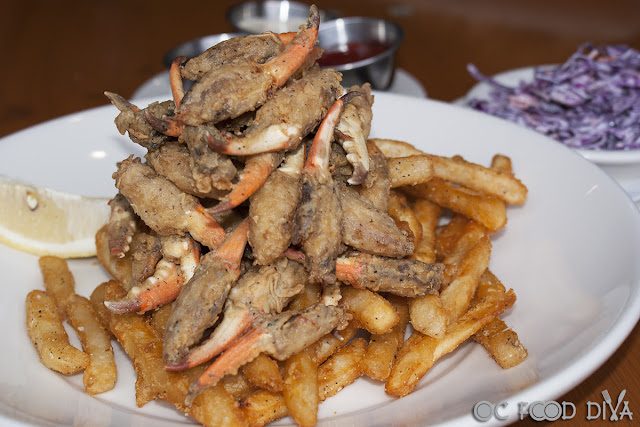 Crab Claws are fresh Gulf blue crab claws lightly floured and fried. If you love crab, you’ll love these. The lightly fried exterior contrasted nicely with the sweet crab meat inside. They are very easy to eat, just like eating artichoke leaves. This would be a great appetizer to share with friends while watching a game and some pints of ice cold beer. Rating: 5/5 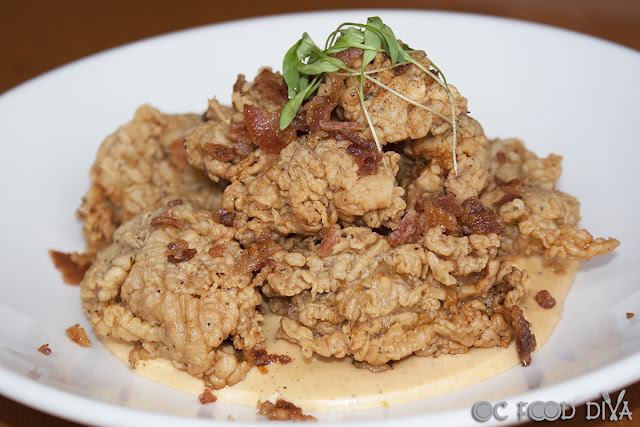 BBQ Gulf Oysters are lightly breaded and fried Gulf oysters served over Creole BBQ cream sauce and topped with crisp bacon and chives. The breading on the outside was like a perfectly fried chicken or chicken fried steak, bumpy, crispy coating with amazing flavor. The oyster itself was juicy and cooked just right where there was still a bit of briny oyster liqueur inside. The creole BBQ cream sauce added a creamy yet spicy kick to the dish. I could eat this forever! Rating: 5/5 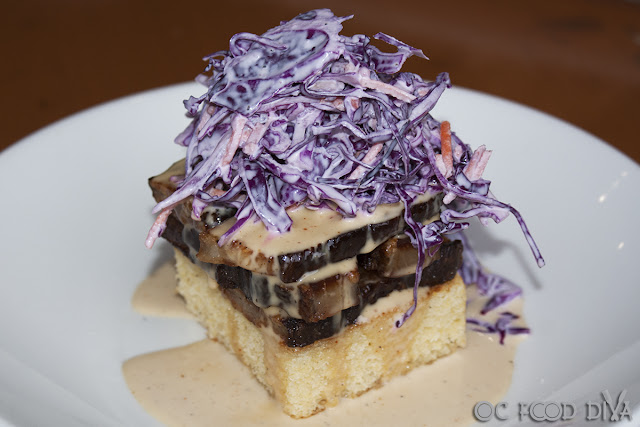 Cola Braised Pork Belly is served over house-made cornbread and topped with white BBQ sauce and red cabbage slaw. The cola helped tenderize the pork and caramelized on the outside for a nice bark. White BBQ sauce was introduced in Decatur, AL by Big Bob Gibson back in 1925. As this was my first time having it, I have to say it was a little different but gave the pork belly a nice tangy flavor. The slaw on top added a crunchy texture. Rating: 4.5/5 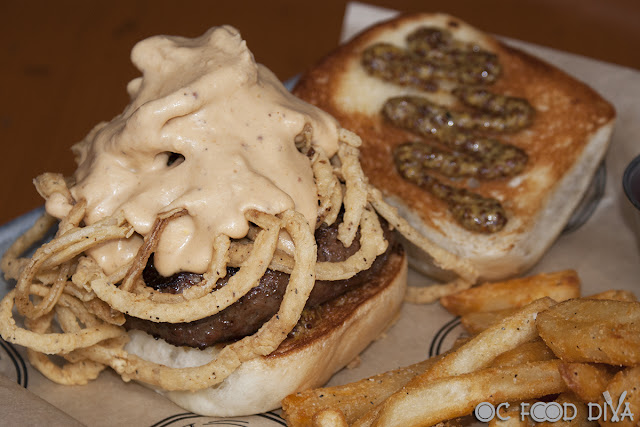 The Beerger is a beer-basted burger on a sweet sourdough bun with Luna’s beer mustard, fried onions, and Luna’s beer cheese. The perfect gastropub burger! The burger patty itself is huge! The mustard added a tangy flavor. The beer cheese was luscious with cheesy and hoppy flavor from the beer. All you need is an ice-cold beer to pair with it! Rating: 4.5/5

If you’re a local or visiting, Luna’s Eat & Drink is the perfect place to grab grub with food that everyone will love.

This post was sponsored by Johnsonville, Melissa’s Produce, Papa’s Pilar Rum, and Liquidiamond but the opinions expressed here are my own.

This was the first day of our trip that I could sleep in. I had been getting up every morning at 4 a.m. to work on projects for a client. This was a working vacation but it pretty much always is when you work in the media. Today, we were able to try the breakfast at our hotel, Home2Suites, in Pensacola, FL. After a warm and filling breakfast, it was time to start packing up the car with our cooking equipment/tools and ingredients and head to The Wharf in Orange Beach for the World Recipe Championship Top 10 Round. I am still in shock that I made it into the Top 10!

I’d like to give a big thank you to my sponsors: Johnsonville, Melissa’s Produce, Papa’s Pilar Rum, and Liquidiamond. I also want to thank The Jelly Queens for sending out jams/jellies to us to play with prior to the competition and Président who supplied me with a quarter of a wheel of brie for this recipe.

Since they assigned our kitchens by our place in the Opening Round, I was so happy to be next to my friend, Lisa Keys. Since Rebecka Evans received 1st place in the Bacon World Championship, I really wanted Lisa to take 1st Place in the World Recipe Championship for Team Saucy Mama. I just love those gals! 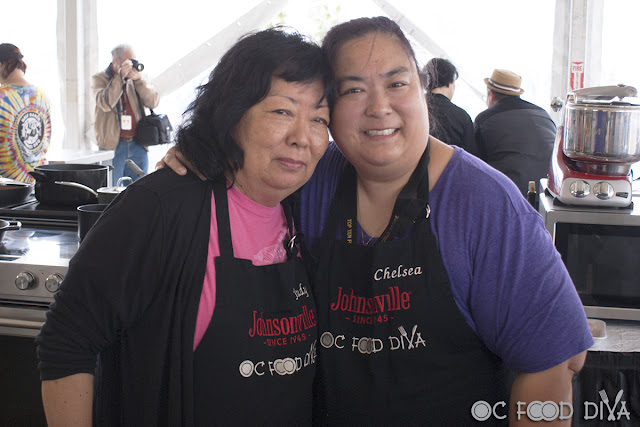 My mom and I only had a couple of chances to play around with this recipe at home. With a final dish only in visual in my mind, we were going to give it our best and see what the judges think. Mom was still nervous, but she was ready to give it all she had. 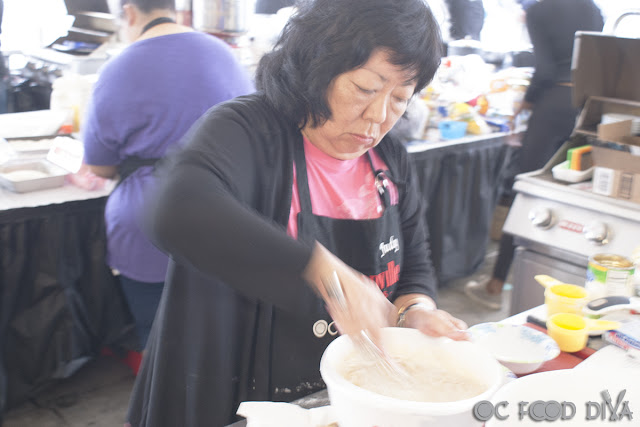 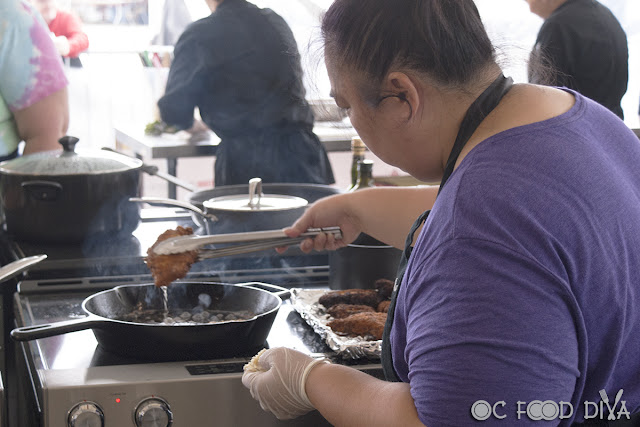 I was focused on battering, coating, and frying up chicken breast fillets in Crisco, y’all! 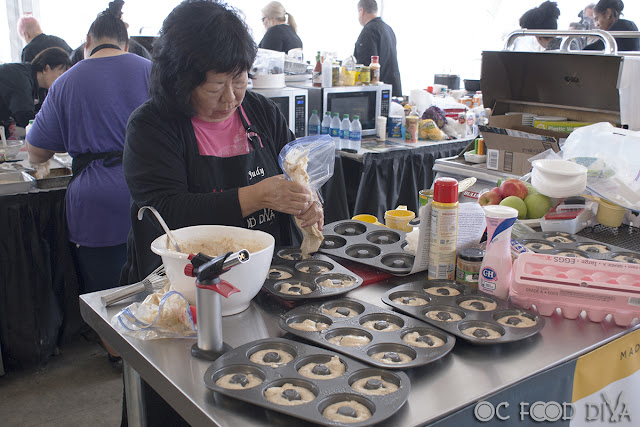 Mom finished the donut batter and filled up the Wilton donut pans. 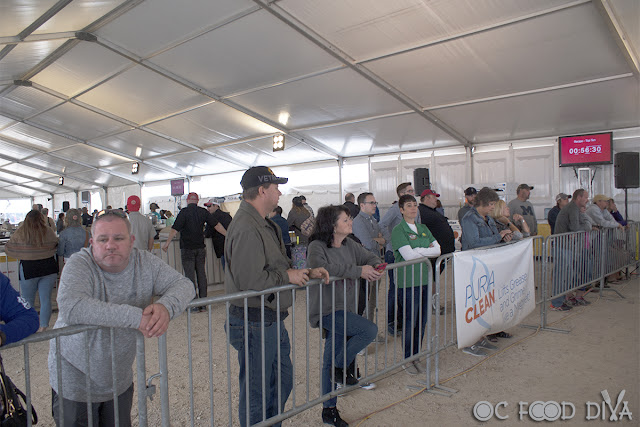 We had a crowd forming around us. My friend, Chef Susanne Duplantis of Makeover My Leftover, was my cheerleader! Her food blog focuses on reducing food waste with creative uses for leftovers. I am always amazed on what she does with leftovers and remaking into new delicious dishes. Suzie Barhyte, Saucy Mama, was also there cheering on Lisa Keys, my Mama Keys. 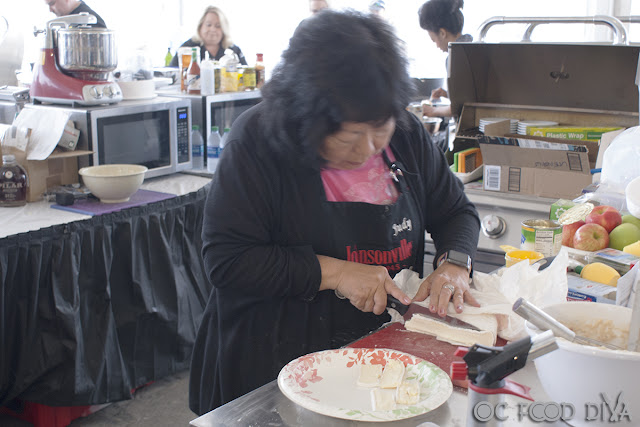 Mom slicing up the brie for our sliders. 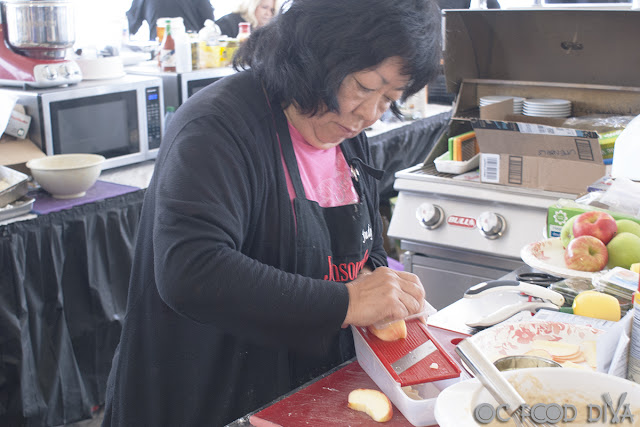 Mom slicing up gala and granny smith apples for the presentation. 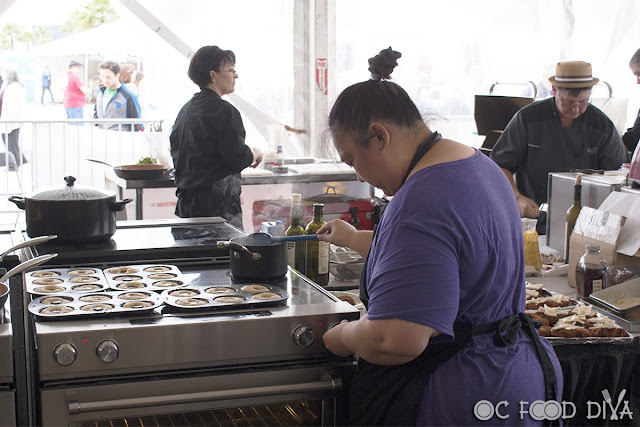 Making the compote for the slider with The Jelly Queens’ Sassy Apple Fig Jam and Papa’s Pilar Dark Rum. 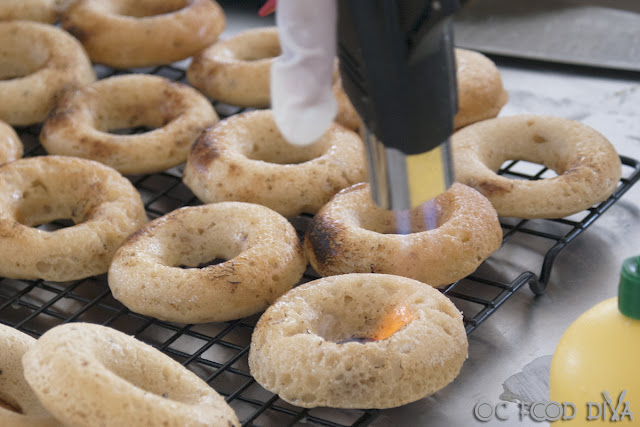 Using a torch I received from our blogger summit last year to bruleé the tops of each of the sliders. 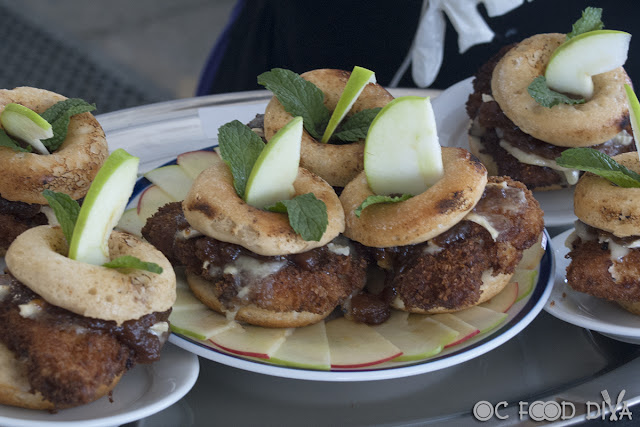 My entry, Apple Fig Donut Clucker, came together as best as we could manage. The donuts didn’t cook evenly in the oven, so some were more golden brown that others. The donuts needed a little bit more apple filling or jam to bring out more flavor and sweetness. I forgot to season my flour dredge but managed to season the chicken right after coming out of the oil. I also bought the wrong grind of sugar so my bruleé wasn’t coming out like it did at home. My mom was also nervous and reversed the fan of the apples. We also used the green apple for the top instead of the red. Overall, the “clucker” slider looked like I had imagined it. It totally looked like it was about to “fly” off the plates. E.A.T. Score: 88.3333 out of 100. Try the recipe below and see what you think: 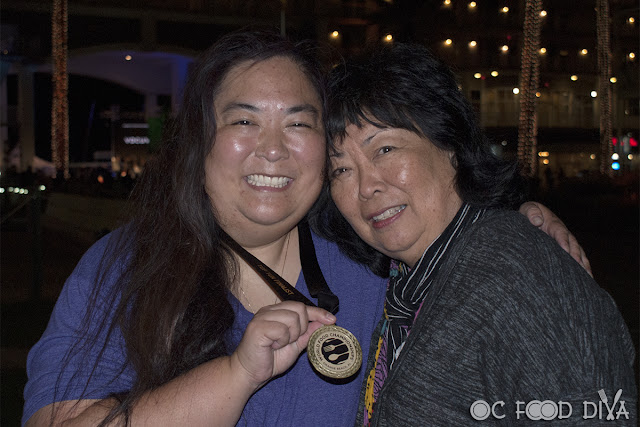 Overall, I placed 5th and am just so proud that we made it so far. Not bad for my first time competing at the World Food Championships! Lisa Keys placed 2nd for another awesome finish for Team Saucy Mama! 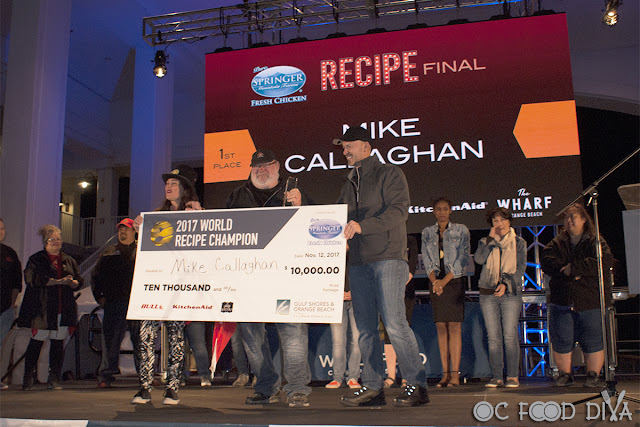 Congratulations to Mike Callaghan of Canadian National BBQ Team for his 1st place win in the World Recipe Championship! Can’t wait to see what you will be serving at the Final Table!