2014 marks the 50th anniversary of Ernest and Julio Gallo’s HeartyBurgundy, described as “a great tasting American red blend with big, generous flavors and a value proposition that helped put wine on America’s dinner table”. Gallo Family Vineyards has produced a limited edition bottle to commemorate the golden anniversary of this original flavor profile that first got Americans into wine in the 1960s and 1970s. Hearty Burgundy was the favorite wine of the founding brothers, paying homage to Italian wines enjoyed at the dinner table with family and friends. Hearty Burgundy even graced the cover of TIME in 1972 bolstering the boom of the California wine industry. The wine outscored more expensive California and French wines by the TIME Board of Oenologists. 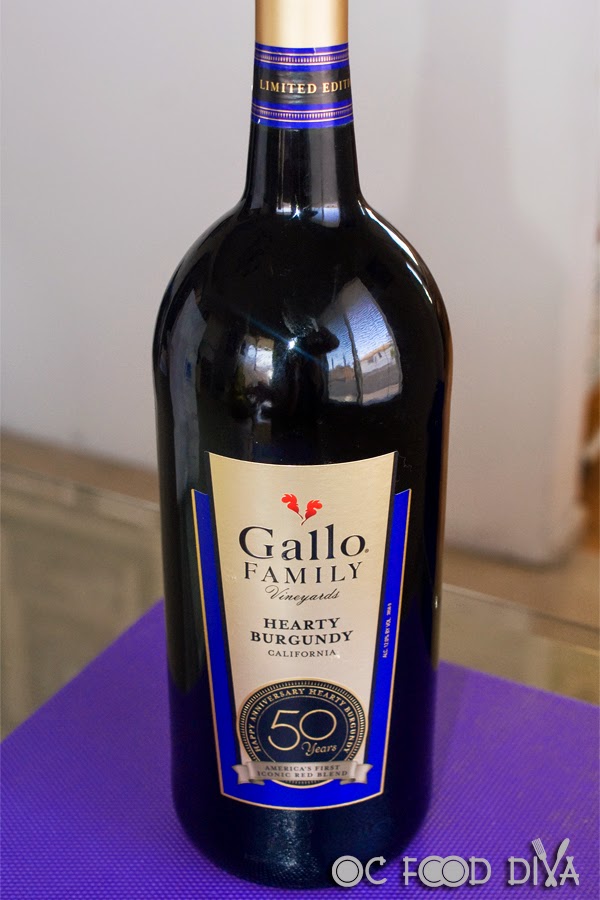 To read more, please visit: http://www.examiner.com/review/50th-anniversary-of-gallo-family-vineyards-hearty-burgundy-wine
at June 27, 2014 No comments:


Kitty Morse was born in Casablanca of French and British descent. When she turned seventeen, she immigrated to the United States. Kitty began catering Moroccan banquets while studying for her Master’s Degree at the University of Wisconsin-Milwaukee. This turned into an educating opportunity for her as she began to teach the intricacies of Moroccan cuisine at culinary schools, spas, and gourmet cooking stores nationwide.

For the last 25 years, Kitty has been a food writer, cooking teacher, and public speaker with nine cookbooks under her belt. She has even cooked alongside Julia Child to benefit the International Association of Culinary Professionals (IACP). She has also appeared on Food Network, CNN, Discovery Channel, as well as Moroccan national television. She also organized and led annual culinary tours of Morocco including cooking demonstrations at Dar Zitoun from 1983 to 2007. Her husband, Owen, documents the journeys through photography in each cookbook.

Mint Tea and Minarets: a banquet of Moroccan memories takes you on a multi-sensory tour of Kitty’s life in Morocco, from the place where she was born to experience life through her senses using beautiful photographs and also involving your sensory experience as you cook these wonderful recipes in your home.

In Chapter 1, Homecoming, Kitty recounts her heart-wrenching story of flying back to Morocco with her daddy’s ashes and fear of her losing him when she landed in Morocco. His last wish was to lay to rest at his home, Dar Zitoun. He spent 20 years restoring this majestic Moorish home. I can see why this chapter contains Kefta (Ground Meat Brochettes) and Harissa (North African Hot Sauce). It’s a comfort food dish and one of my favorites. The recipes are very straight forward. The only thing you night have a problem finding is preserved lemon pulp. We have a large Persian community in Orange County. We went to three Persian markets to find this. The last store used to stock it, but the vendor they got them from went out of business. I used my Hawaiian roots and made my own mock-preserved lemon on the fly by mashing up peeled lemon and added some champagne vinegar. I found out later that Moroccan preserved lemon is preserved with salt not vinegar. Kitty has a cooking demonstration video on YouTube showing how to make Moroccan preserved lemons. You will need to make these 4-6 weeks in advance of the recipe. The kefta turned out tasty nonetheless. The flavors of beef and lamb combined with onion, cilantro, parsley, cumin, and garlic were the perfect blend. The parsley and cilantro gave it a refreshing green flavor. The barbeque gave it a charcoal grilled flavor. Definitely watch the grill and don’t overcook. The fat content is less in the sirloin and lamb so it can get dry or overcooked very fast. Harissa had a beautiful vibrant orange/red color. I used the NutriBullet to combine the ingredients together into a sauce in less than 30 seconds. The flavor is intense and vibrant with sweet, slightly spicy, and has a creamy texture. The harissa worked well with the kefta adding another flavor profile that became a symphony to the tastebuds. I would definitely add more chili kick to it next time. The next day, I made a Kefta sandwich with the leftovers (kefta, harissa, ans sprigs of cilantro on a French baguette). Thumbs up! 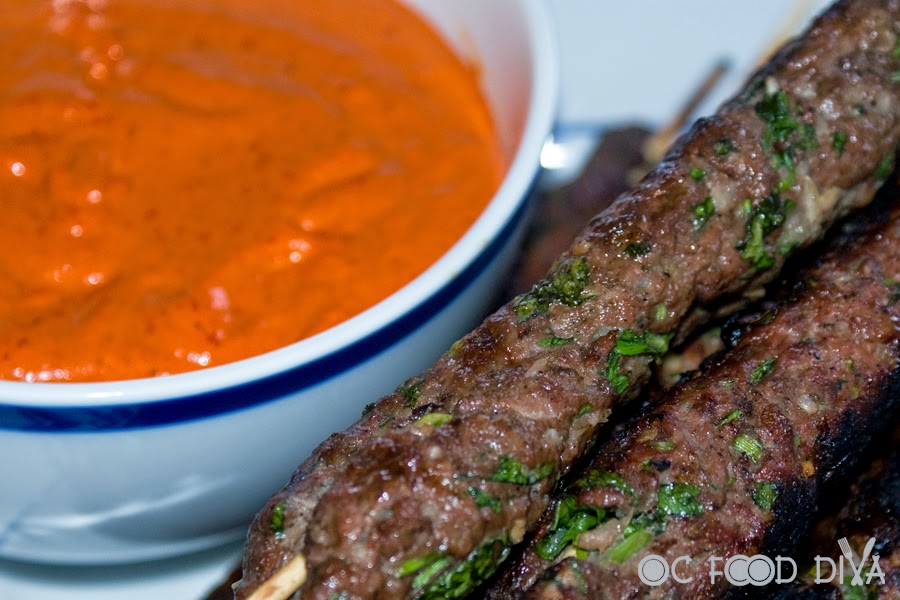 To read more and see slideshow, please visit: http://www.examiner.com/review/cookbook-review-mint-tea-and-minarets-a-banquet-of-moroccan-memories
at June 22, 2014 No comments:

Music and BBQ come to a crossroads at the San Bernardino County Fairgrounds in Victorville, CA. Your will be mesmerized by Pop, Blues, Rock, Old School, and R&B music as your olfactory senses are enticed by the aroma of the nation’s top pit master competing for a championship win sanctioned by the prestigious Kansas City Barbecue Society.

The barbecue cook-off features four categories of competitions: Beef Brisket, Pork Ribs, Chicken, and Pork. The winning team will be named champion of the event and as an event-goer, you can cast your vote toward the People’s Choice award. Thousands of dollars in cash and prizes are at stake, but more importantly, national bragging rights. Stiff competition is expected to ensue as teams battle to de-thrown last year’s champion, Wild Willy’s Smokin’ Hot BBQ.

De Bortoli Wines born in the land down under


In 1924, Vittorio and Giuseppina De Bortoli immigrated to Australia from a village near the historic town of Asolo in Northern Italy to escape the ravages of World War I. Vittorio, at the age of 24, worked his way through odd jobs on farms and wineries. With 3 years savings, he purchased a 55-acre mixed “fruit salad” farm in Bilbul near Griffith. In 1928, due to a grape surplus, Vittorio was unable to sell his grapes so he made his own wine to enjoy with friends and family. The first crush yielded 25,000 gallons of shiraz. De Bortoli survived through the Depression, but was rocked by the onset of World War II as Australians of German and Italian descent were confined to prison camps or severely restricted by the government. In 1952, the rationing system on alcohol was lifted and a consumer boom pushed De Bortoli to the forefront.

Vittorio’s youngest son, Deen, joined the family business with his passion for winemaking machinery and new technology. By 1959, De Bortoli had increased capacity to 110 vats holding 795,000 gallons. De Bortoli Wines is still family owned and run by Deen and Emeri De Bortoli’s four children: Darren, Leanne, Kevin, and Victor. Their vineyards stretch across Yarra, King, and Hunter Valleys from its original base in Bilbul, in the Riverina region of southern New South Wales. The core remains the same: “Hard work, generosity of spirit and sharing good food, good wine, and good times with family and friends.” 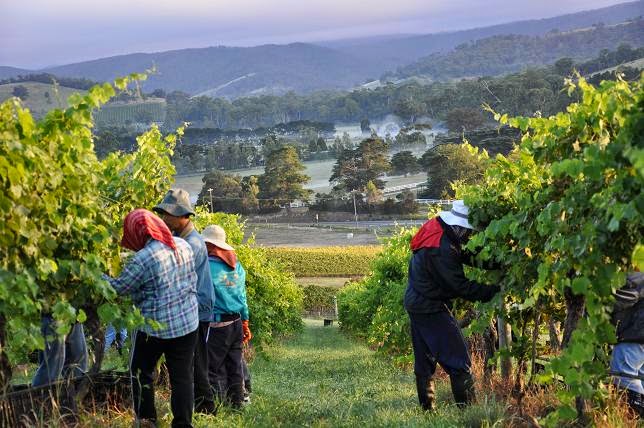 To read more and see slideshow, please visit: http://www.examiner.com/review/de-bortoli-wines-born-the-land-down-under
at June 10, 2014 No comments:


The first KTOWN Night Market opened on Friday, April 18, 2014 for a 2 day stint at Robert F. Kennedy Community Schools in Los Angeles’ Koreatown. The first day attendance was astounding! Koreatown was abuzz with crowds headed to the same place to experience this inaugural event. The big draw for me was a star-studded line up of Food Network’s TheGreat Food Truck Race winners and participants. The event layout was pretty good with the Food Truck Alley on the right as you enter the grounds, community outreach in the center, and to the left were carnival games for the kids, stage, and Food Town where you could find all kinds of street food from Asian cuisines that you might not see every day. There was plenty of dining space so you didn’t have to stand and eat if you didn’t want to.

Our first stop was The WhiteRabbit. The first time I saw The White Rabbit was on the television show, Travel Channel’s Man v. Food “Street Eats” episosde featuring the White Rabbit Burrito weighing in at 6 pounds and 2 feet in length. Owners Michael Dimaguila, Chef James Du, and Melvin Chua noticed a lack of Filipino cuisine represented in the booming food truck industry. On July 10, 2010, The White Rabbit food truck was born along with the White Rabbit Café in Canoga Park, CA on November 28, 2010. The Pork Sisig Burrito is fried pork belly, chopped and pan fried with onions and jalapenos combined with garlic rice, egg, and cheese wrapped in a flour tortilla. This burrito is definitely an anytime burrito (breakfast, lunch, and/or dinner). I loved the texture of the shredded pork with its crispy goodness. The garlic rice has just the right flavor, not too overbearing or bland. The egg gave it a nice touch by adding more richness to the pork flavor. The size was just right too, not too big and not too small, about the size of a Monster energy drink can. The only thing I would add is a little bit of green onion to refresh the palate, but other than that, it’s perfect! Thumbs up, way up! To find the truck, visit the café, or learn more about The White Rabbit, visit their website. 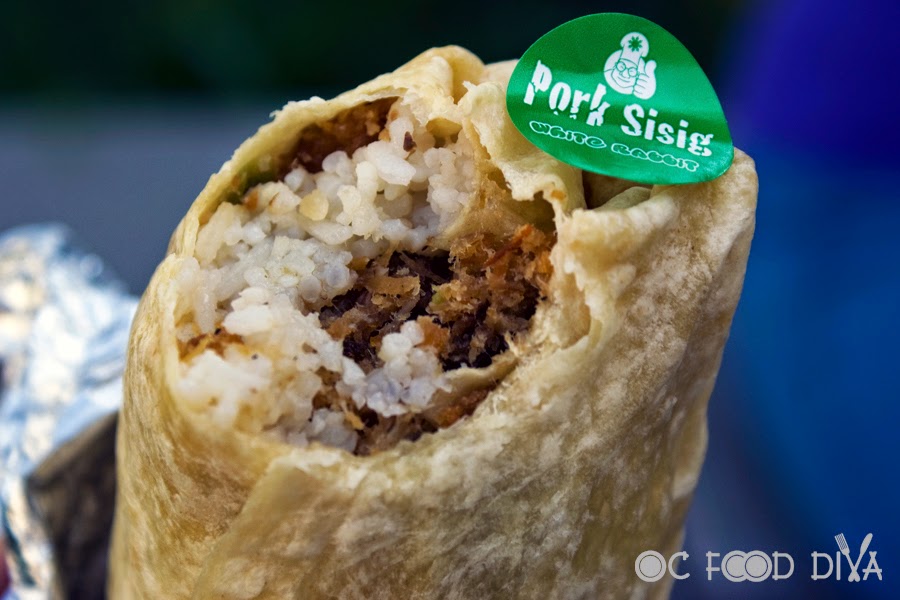 To read more and see slideshow, please visit: http://www.examiner.com/review/ktown-night-market-los-angeles-ca
at June 01, 2014 No comments: